For the first time since 1945, the Chicago Cubs will play in the World Series beginning Tuesday, October 25th at 7:08 pm CST.

An awful lot has happened to the world since then, but one unerring constant in Chicago was futility on the north side. Missing playoffs, blown playoff series, and a multitude of other failures so debilitating that they had to be mystical. Really, the team just labored under poor management and ownership for decades at a time. The 2016 team changed all that, and because I could write 10,000 words on them, I had to find a way to ground the monumental achievement they completed last Saturday by vanquishing Clayton Kershaw in the NLCS after he eviscerated them in Game 2. So, here it is.

Writers across the country say we shouldn’t be surprised that the Cubs made the Fall Classic. They won 103 games, after all, with an incredible staff of pitchers, great hitting, and a historic defense. They became one of the best teams in baseball by most appreciable measures. However, those same writers spent an awful lot of time writing about how 100-plus win teams don’t win the series all that often, and how the playoffs differ from the regular season, etc. Either way, as Cubs fans, we are conditioned to expect the fall. Thus, lifers tend to never develop the pride that comes before it. Cubs fans could be walking along an eight-lane road and still feel like they’re on the edge of a knife (Clevelanders know this feeling too, along with others). Cubs fans do not have a monopoly on sadness or sports misery, but we’re definitely part of the oligarchy.

103 wins, defense, pitching, and run differentials aside, this postseason has felt a lot more up-and-down to me than one where the Cubs only actually lost 3 games. There have been obstacles, and testing moments for fans. Moments where it looked like 2003, 2008, or 2015 all over again. Moments where it looked like Conor Gillaspie’s legend would grow on the Cubs’ grave, or when the offense looked so lost we might never find it. That’s why I want to talk about corners. Turning points. So far, two have stood out to me in particular.

The first was Kris Bryant’s home run in Game 3 of the NLDS. After Aroldis Chapman came in for a tough save opportunity, the Cubs coughed up a lead they took over Madison  Bumgarner on a Jake Arrieta 3-run shot. In the top of the ninth, Bryant jacked the ball to the edge of the wall, where a car advertisement bounced it out to tie the game up at 5 runs apiece. The Cubs lost that game, after a heroic effort by Mike Montgomery in extra innings, but it was the first time I really believed.

You’d probably expect me to say the 9th inning in Game 4, but here’s my argument: that home run, and the survival of multiple extra innings, made me believe that Game 4’s end could happen. The eighth inning of Game 3 was a horror show that probably looked pretty “classic” to Cubs fans. It felt familiar and crushing. It didn’t break the team, though. They got a man on base, tied the game, and fought. That, more than anything, makes this team unique to me among the two-plus decades of Cubs baseball I’ve lived through.

The second corner was Game 4 of the NLCS, for a similar reason. After 21 scoreless innings and a totally helpless two games of offense, the bats came alive again on an Addison Russell home run. The Cubs teed off on Julio Urias, the Dodgers’ 20-year old phenom, and the rest is history. Anthony Rizzo returned to the realm of the living with Matt Szczur’s bat in hand, Bryant finally got driven home, and they looked like our 2016 team again. Los Angeles never recovered from that shellacking and dropped three straight, which leads us right here.

By taking the pennant, the Cubs already broke one major curse. They defeated my pessimism, for the most part. The front office executed a clear plan nearly to perfection and on schedule, if not early. Now, there’s only one thing left, after five years of chipping away at more than a century of ineptitude. Revitalizing Wrigley, making the fans believe again, hoarding prospects, and building them into high-character budding stars that wouldn’t see the big leagues until they were actually ready were all big steps. Now, they’re at the precipice. If breaking the Cubs’ streak of misery is Everest, this team is at the Hillary Step. Most of it’s behind them, but there’s one more precarious edge to walk before the summit. And you know what? I finally think they can. 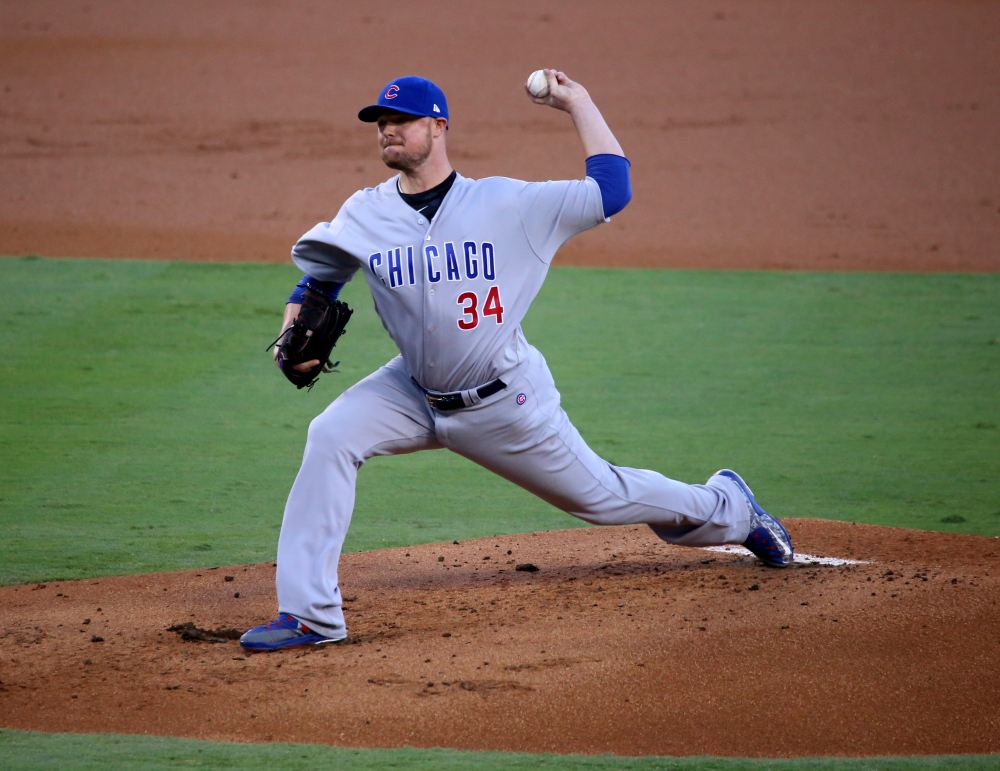 The third corner, and the one I’ll end on, is one I’ve turned hundreds of times over the course of my life. It’s the one just inside an old house in rural Illinois, right when the entrance turns into the living room. The layout, the carpet, the furniture, and the TV sitting in the corner have changed over the years. The one thing that hasn’t, though, is my grandfather sitting in the sole armchair, Bud Light in hand, watching the Cubs. I like to say that’s how I learned half of the curse word vocabulary (the other half came from golfing with him). He was five years old when the Cubs went to the Series last in 1945. His words sitting in that chair have changed too, over the years.

“Boy, that Sammy Sosa sure can hit.”

“Samardzija’s pitching good, they just can’t get him a win.”

“Bryant is so good.”

“Baez and Russell sure can play.”

“The Cubs are in the World Series.”